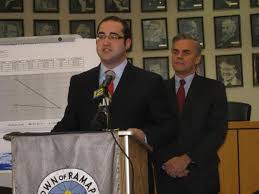 On Tuesday June 25, 2014, the Ramapo Republican Chairman and a number of Ramapo Republican Committeemen attended the Town Hall Meeting that was hosted by Councilman Daniel Friedman. The event was also attended by a number of town residents who voiced a lot of their concerns about the health and well being of the town. Prior to this meeting, we had submitted a FOIL application to get all the town meeting minutes for the last 2 months so that we were well informed for this meeting.

Councilman Friedman gave an opening statement as to how he feels Supervisor St Lawrence has been violating the law with some of his recent actions. Mr. Friedman said he was unaware, misinformed, and misled by the supervisor, which led to him voting for things that he now regrets.  This explanation seems far fetched to all people in attendance. A few of the Ramapo committeemen got up to the podium and directly challenged comments about the following:

Why did he most recently vote in favor of the  permanent placement of Bernard Charles (husband of Councilwoman Brendal Logan) to a Parks Department job with a salary of $40,000 per year (plus benefits) after he made such a big deal about Bernard Charles having the $60,000 temporary consulting job prior to this permanent appointment. (see attached town meeting minutes). His answer was that he was saving us money by reducing this “salary” from $60,000 to $40,000. He called the consulting job a “no show job” and that he was personally checking Bernard Charles’ timesheets each week to make sure he is coming to work. This was a very poor answer by him. If he was not doing his job, and not showing up to his job as a consultant, then why would you hire that same person to a full time job, a job that had been unfilled for a number of years. Once again, no answer from someone you don’t want watching over the finances of our town.

We told him we understand that the town had to issue a new short term BAN (Bond Anticipation Note) because the existing term expired. Note, the Town of Ramapo is not able to get permanent bonds in place at this time. (apparently Wall Street thinks so low of Ramapo finances that there are no takers for our municipal bonds). We wanted to know if this is a reflection of the town being in even worse fiscal shape than they were letting on. His initial response was that he didn’t know much about it, but after being repeatedly asked about it (and reminding him that he would have voted for this financing), he said he remembers conversation on that matter and that this was common with for towns that are in tough fiscal shape. Once again, this was a very poor answer from someone you don’t want watching over the finances of our town.

Why has he voted “yes” somewhere in excess of 2,600 times and only voted “no” four times.

Why did he vote for the baseball stadium against the wishes of more than two thirds of the voters in the referendum. Why also did he continually vote to fund the stadium to the tune of almost 60 Million Dollars.

Unfortunately, a lot of us went there to hear honest and no nonsense answers, but instead we got someone who was passing the buck and blaming all his woes on Supervision St Lawrence. Councilman Friedman has voted in lock step with Supervisor St Lawrence and the other chronies on the board, and this bait and switch public relations campaign is not fooling us. Stay tuned to our website and facebook page for further updates. 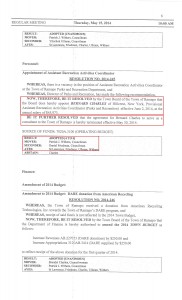