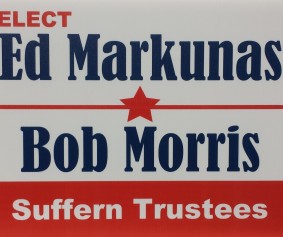 Please vote for our candidates on November 4th!!!!!

Ed is a consultant working for the Village of Suffern Parking Authority (SPA). His expertise lies in the administration, management and implementation of SPA projects. Through his direct involvement in the Parking Authority’s special projects, Ed routinely acts as a liaison with Suffern’s police, Department of Public Works, contract attorneys, business owners, Chamber of Commerce, village officials and residents. Prior to the Suffern Parking Authority, he was a New York City police officer assigned to the Special Operations Division and retired after 20 years of service. As a testimony to his dedication and loyalty to his country, Ed is a proud Veteran of the United States Coast Guard as well as a active member and officer of the American Legion. Long term Suffern residents, Ed and wife, Bonnie, have two children.

Robert moved to the village of Suffern from the Bronx in June of 1968. He and his wife raised two sons here. As his sons became involved in sports, he and his wife became involved with the Suffern Midget Mounties football and Cheerleading Program. He was the president of this organization for about 8 years.

Life time member of the Knights of Columbus.

A member of the F.O.P. (Fraternal Order of Police).

NYC Dept of Sanitation – Retired. As the Executive officer of the Sanitation Police, he was in charge of the Sanitation Police Task Force, which was charged with apprehending and prosecuting Illegal dumpers and the monitoring of Private Carters and transfer stations in N.Y.C. Upon his retirement, he opened a Private Investigation and Security Consulting business. One of our office’s was located in the village of Suffern. He operated this business for a period of 8 years. In 2000, he sold the company when he was offered the chance to manage a new start up business. In 2000 he and his partner opened a consultant business and managed a startup company located in the Bronx, NY. They managed this company for a period of eight years.  He has dealt with large budgets, managing cost for personnel. He was responsible for purchasing equipment maintaining staffing, interacting with suppliers, labor, unions and regulatory agencies.His background will help me revive Suffern, deal with the looming budget crisis the village faces and make Suffern once again a healthy, vibrant community.